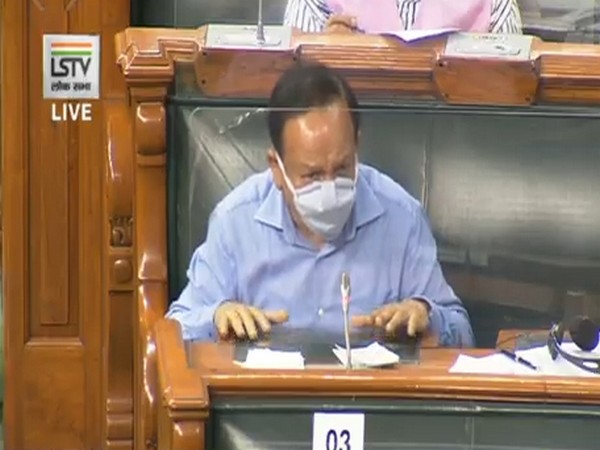 New Delhi [India], September 20 (ANI): Union Health Minister Dr Harsh Vardhan on Sunday informed that over four coronavirus vaccines are in advanced stages of pre-clinical trial in India.
“145 vaccine candidates across the world are under pre-clinical evaluation, around 35 under clinical trials. In India, we gave all support to 30 vaccine candidates -3 of these are in advanced trials of phases 1, 2, and 3. Over 4 in advanced stages of the pre-clinical trial,” Harsh Vardhan said in the Lok Sabha during the discussion on the COVID-19 pandemic
The Minister also said that the Ministry of Health and Family Welfare received Rs 893.93 crores from PM-CARES Fund for 50,000 made in India ventilators.
“On January 30, World Health Organisation (WHO) warned the world about such disease. But we had started work from January 8. By January 17, we had issued a detailed health advisory and started point of entry surveillance and community surveillance. On January 30, when the first case in India was reported, authorities did 162 contact tracing,” he said.
“Even today, 40 lakh people were kept under community surveillance. Contract tracing of more than 1 crore people was done. 15 lakh people were screened at airports. When the first case in Nepal was reported, 16 lakh people were screened on the border. From March 16 to March 23, more than half of the states have imposed partial or complete lockdown,” he added.
To handle pandemic like this in the future, Harsh Vardhan said that work has started under Atmanirbhar Swasthya Bharat in which Rs 65,000 crore package has been allocated. (ANI)