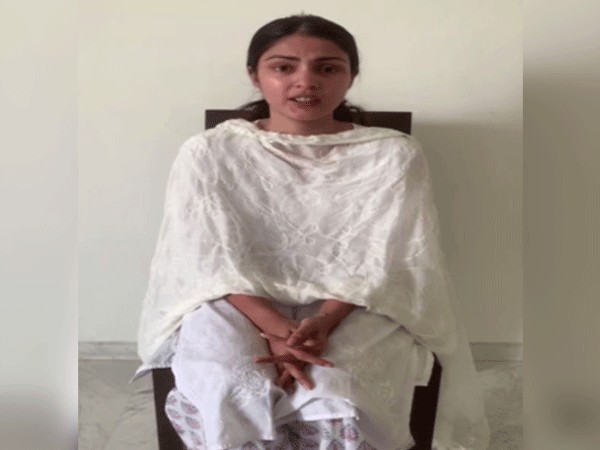 Mumbai (Maharashtra) [India], September 8 (ANI): Actor Rhea Chakraborty, who has been arrested by the Narcotics Control Bureau (NCB) in a drug case linked with actor Sushant Singh Rajput’s death, has been sent to 14-day judicial custody on Tuesday after her bail plea was rejected by the court.
Chakraborty appeared before the Magistrate via video conference from NCB office in Mumbai.
In its remand application of Chakraborty, NCB stated that she is an active member of a “drug syndicate” and used to manage finance for drug procurement along with the late actor.
NCB said that Chakraborty’s disclosure/statement had made it clear that she is an active member of a “drug syndicate” connected with drug supplies.
It said that Chakraborty revealed about her involvement in the procurement of drugs and financial transactions and also her instructions to Dipesh Sawant, Showik Chakraborty and Miranda.
Sawant was arrested by the NCB for his role in procuring and handling of drugs. Showik and Miranda have also been arrested in the same case.
As per NCB’s remand copy, Chakraborty has acknowledged the statements of other accused and it is clear that she used to procure drugs for Rajput’s consumption.
It stated that Sawant said that financial issues for purchase of drugs were also being dealt with by Rajput and Chakraborty.
As per NCB, Showik said that Basit Parihar provided drugs to Dipesh Sawant (Sushant Singh Rajput’s staffer) through Kaizen Ibrahim.
NCB said Showik confessed that he used to facilitate the delivery of drugs through Zaid, Basit and Kaizen. It also highlighted that Showik disclosed that these drug deliveries used to be received by Rajput’s aids and every delivery and payment was in conscious knowledge of Rhea Chakraborty.
As per NCB’s remand application, Samuel Miranda has confessed that Sushant also along with rhea used to instruct him to procure the drug.
Rajput also used to deal with the financial matter regarding these drugs along with Rhea Chakraborty.
As per NCB’s remand, Dipesh Sawant (Sushant’s staffer) disclosed that he used to receive drugs for Sushant on his (Sushant’s) instructions.
During the statement, Samuel Miranda also disclosed that he used to procure drugs on instructions of Sushant Singh Rajput And Rhea Chakraborty and financial matter in this regard were being dealt by Rhea And Sushant Singh Rajput, read the remand application.
Earlier, Ashok Jain, Deputy Director General (DG), South-Western Region, NCB said that the agency will seek her judicial custody.
“Rhea Chakraborty will be produced before magistrate shortly. We don’t need her custody remand so we will seek judicial custody. We are not asking for her custody remand as whatever we wanted to cross with her, we have done already,” he said.
“We will oppose bail to her. We are only seeking judicial custody but we don’t support the bail. Rhea was sent for a routine medical check-up. She tested negative for COVID-19. Whatever she told was sufficient for the arrest. We have arrested her, it means we had enough,” he added.
Jain said that NCB did not recover any contraband from her.
Chakraborty is the ninth person arrested by the NCB in the ongoing case.
The NCB launched an investigation after it received official communication from Enforcement Directorate (ED), in which there were various chats related to drug consumption, procurement, usage and transportation in connection with the Sushant Singh Rajput case.
The agency had said that linkages of Parihar with the earlier registered i.e., based on the preliminary enquiry on the details submitted by ED, were found.
The ED had on July 31 registered an Enforcement Case Information Report in the late actor’s death case after a First Information Report (FIR) was filed by Rajput’s father KK Singh against Rhea Chakraborty in Bihar on July 28.
Rajput was found dead at his Mumbai residence on June 14. (ANI)

Trendspotters.tv ties up with ‘Kaanchi’

‘My doctor prescribed rambling for lockdown…