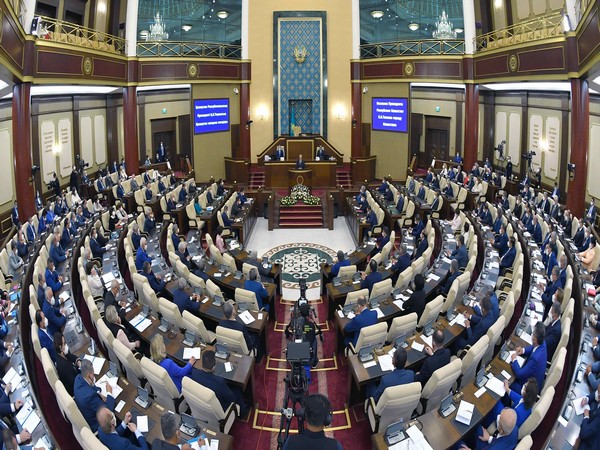 Nur-Sultan [Kazakhstan], September 4 (ANI): Kazakh President Kassym-Jomart Tokayev announced that the government will allocate 150 billion tenge for the payment of incentive bonuses to medical workers for the second half of the year.
In his address to the nation on September 1, Tokayev said the importance of the medical profession must be supported financially.
“I instruct to allocate 150 billion tenge (USD 357 million) for the payment of incentive bonuses to medical workers for the second half of the year when the budget is revised soon. We are doing this now, during the crisis, and we must continue to do this on a systematic basis. By 2023, medical wages will be twice the average wage in the economy,” he said.
He stated that all basic medicines and medical devices should be manufactured in Kazakhstan and domestic pharmaceutical industry should be self-reliant.
“The issues of the supply of medicines have been resolved, but the domestic pharmaceutical industry needs to be put on its feet. All basic medicines and medical devices must be manufactured in Kazakhstan. This is a national security issue. From next year, I expect concrete results in this area,” Tokayev said.
The Kazakh President informed that 13 new hospitals focusing on infectious diseases will be built in the regions of the country by the end of the year. By 2025, 20 modern multifunctional healthcare facilities will be commissioned, he added.
“This means an inflow of about one and a half trillion tenge of investments in health care,” Tokayev said.
The Kazakh President stressed that two multidisciplinary medical centres will be established in Nur-Sultan and Almaty.
He said primary healthcare should be more mobile and accessible to a wide range of the population, including those living in the countryside.
Tokayev said, “To create effective rural healthcare within three years, it will be necessary to provide all rural villages with feldsher-obstetric stations and medical outpatient clinics.”
He outlined that measures for the further development of national healthcare will make it possible to fully equip all medical organisations with the necessary equipment, to update the hospital beds fund by 50 per cent, replace outdated infrastructure and increase the life expectancy to 75 years.
Calling for the change in approaches to public administration, personnel policy, decision-making system and responsibility for their implementation, Tokayev said he decided to create an Agency for Strategic Planning and Reforms, which will report directly to the President.
He said the transfer of most government officials to work remotely in the wake of COVID-19 pandemic showed that the state apparatus can and should be reduced.
“I instruct to speed up the timing of the reduction of the state apparatus and workers of the quasi-public sector. This year they should be cut by 10 per cent, and next year by another 15 per cent. Thus, we will solve the problem of reducing officials by 25 per cent in 2021,” he said adding that the saved funds will increase the salaries of the remaining employees.
Tokayev called for the introduction of a digital “social wallet” for every citizen, as well as create an appropriate distribution system.
Highlighting the issue of teachers getting low salaries, Tokayev stated he made a decision to increase the salaries of teachers by 25 per cent from January 2021 and the increase will continue in the future. “For these purposes, an additional 1.2 trillion tenge (USD 2.8 billion) will be allocated over the next three years,” he said.
“We need to solve the problem of the all-round development of children before they enter school. I have set a task to ensure by 2025, 100 per cent coverage of preschool education and teaching for children under 6 years of age,” he added.
Tokayev further said the government should reorient the entire vocational education system towards the formation of competencies that are in demand in the labour market.
He said a new anti-corruption restriction will be introduced for civil servants, deputies, judges regarding their ownership of accounts, storage of cash and valuables in foreign banks from 2021. “If civil servants or heads of quasi-state organisations have dual citizenship, they are subject to dismissal from their positions,” he said.
The Kazakh President proposed that powers of local government bodies and local self-government bodies will be gradually differentiated.
He stated that more than two billion trees will be planted in the countryside and 15 million in cities and towns over the next five years. (ANI)

Centre within its rights to suspend MPLADS, says Bombay high…