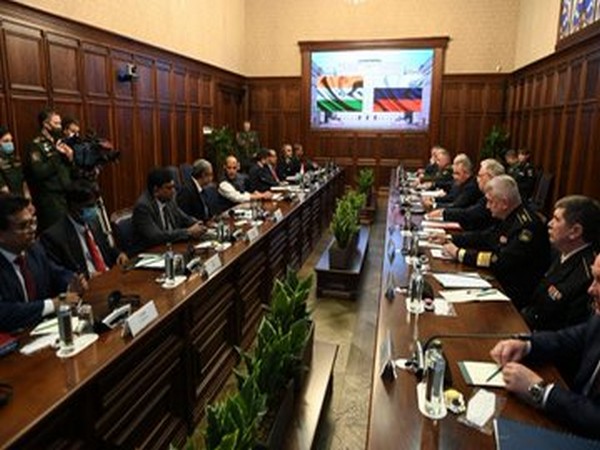 Moscow [Russia], September 3 (ANI): Defence Minister Rajnath Singh on Thursday met his Russian counterpart General Sergey Shoigu in Moscow wherein the duo discussed about strengthening defence and strategic cooperation between both the two countries.
“Excellent meeting with the Russian Defence Minister General Sergey Shoigu in Moscow today. We talked about a wide range of issues, particularly how to deepen defence and strategic cooperation between both the countries,” said Rajnath Singh in a tweet.
Singh reached Moscow on Wednesday on a three-day visit to Russia to attend the combined meeting of Defence Ministers of Shanghai Cooperation Organisation (SCO).
Meanwhile, Defence Secretary Dr Ajay Kumar held a meeting with Dmitry Shugaev, Director, Federal Service of Military-Technical Cooperation, Russia.
According to a tweet by Russian Embassy in India, Russian Defence Minister Sergey Shoigu thanked Defence Minister of India Rajnath Singh for visiting Moscow in June and highlighted colossal potential of collaboration between Russia and India. “Military and military and technical cooperation were discussed.”
Minister of State for External Affairs, V Muraleedharan spoke at the India-Russia Young Scholars International e-Conference 2020 on the 20th anniversary of India-Russia Strategic Partnership.
“The time tested India-Russia relationship is based on unparalleled mutual trust and respect, common interests and concurrence on fundamental issues of global affairs,” he said in a tweet.
“The dynamism of the India-Russia relationship has propelled the bilateral cooperation beyond the traditional areas to almost all sectors of the economy benefitting the people of both countries. Our trade has also increased by 40,” he added. (ANI)

Precautions taken to thwart any misadventure by Pak should any threat develop along northern borders: Gen Rawat

Decision on developing global supply chains should be based on trust not only on costs: PM Modi

BJP works to create divide, Congress to connect with all: Rahul Gandhi

Vicky Kaushal has a sweet reply to Katrina Kaif’s wish for him; Says ‘Shaadishuda wala Birthday’

777 Charlie Trailer: Rakshit Shetty’s next is a nostalgic journey of an aloof man & his loyal furry friend

Preity Zinta celebrates 19 years of Armaan; Calls her character a ‘psychotic spoilt brat with a wounded…