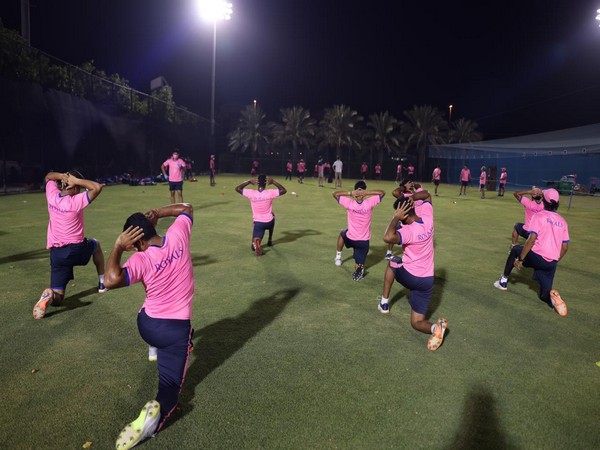 Dubai [UAE], Aug 27 (ANI): Rajasthan Royals on Wednesday conducted their first training session, beginning preparation for the upcoming 13th edition of the Indian Premier League (IPL).
The players reached Dubai on August 20 and began their six-day quarantine period.
“The boys landed in Dubai and went straight to the hotel. As per the COVID-19 protocols set by the BCCI, they will be quarantined in their rooms for six days before they can step out and take part in any form of training,” the franchise had said in a statement.
After completing the mandatory quarantine period, the players had their first training session.
The IPL will be played for 53 days, from September 19 to November 10, across three venues in the UAE — Abu Dhabi, Sharjah, and Dubai.
The final match is scheduled to be played on a weekday, i.e. Tuesday, for the first time in the history of the T20 tournament.
This time, both the afternoon and evening matches will be played half-an-hour earlier than usual.
“IPL 2020 will be played from September 19 and the final will be played on November 10, 2020. The 53-day tournament will witness 10-afternoon matches starting at 15:30 IST while the evening matches will start at 19:30 IST,” a BCCI release had stated.
The IPL was originally slated to be played from March 29, but it was postponed due to the coronavirus pandemic. (ANI)

Death toll due to flash floods in Afghanistan rises to 110

Abhay Deol proud to have worked with children, coaches for…