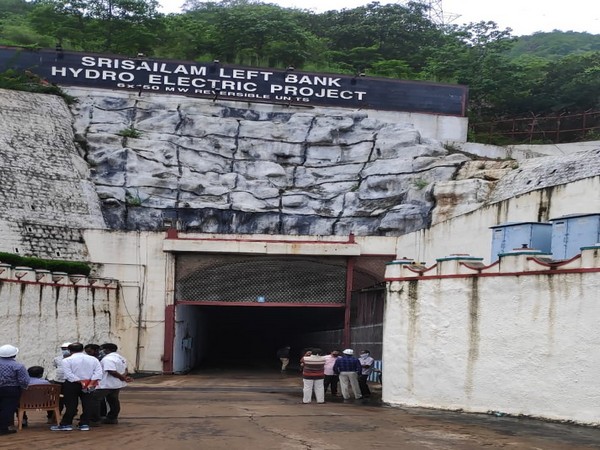 New Delhi [India], Aug 21 (ANI): After playing an important role in rescuing people at the Kozhikode airport a few days ago, the Central Industrial Security Force (CISF) officers and personnel of FSTI, Hyderabad played a vital role in rescue operations at Telangana State Power Generation Corporation Project Srisailam in Telangana.
“In the late night of August 20, 2020, a major fire accident occurred in Telangana State Power Generation Corporation tunnel at Domalpenta, Srisailam. One deputy engineer, four assistant engineers including a lady officer, two service elders and two battery service providers (nine in total) were trapped inside the tunnel,” CISF said in a statement.
“The director, CISF NISA Hyderabad was apprised of the matter in the morning of August 21, 2020 at around 8 am by the Director General of Telangana State Disaster Response and Fire Services, Hyderabad and was requested for the deployment of our rescue team,” CISF said.
Srisailam is 245 km from NISA, Hyderabad and it takes 5 hrs and 30 mins to reach the site. The CISF team reached the incident site at around 1.45 pm and provided the first comprehensive response in the incident.
“After reaching the spot, it was learnt that tunnel is of four floors with fourth floor being at the ground level and remaining three floors are below the ground level. The electrical panels on the fourth floor and generators on the second and third floor were involved in the fire. As the only entry to the tunnel is through the generators and electrical panels, there were no survivors due to lack of ventilation. But CISF rescue team was able to retrieve most of the bodies which were lying in the difficult lower part of the dam after 5 hours of continuous operation,” CISF said in a press statement. (ANI)

Rhea Chakraborty’s visit to mortuary ‘very suspicious’ as she had ‘no relationship’ with Sushant: Vikas Singh

Lack of tight overs, no-balls make it difficult for Team…

Bombay HC orders CBI probe into allegations made by Param…