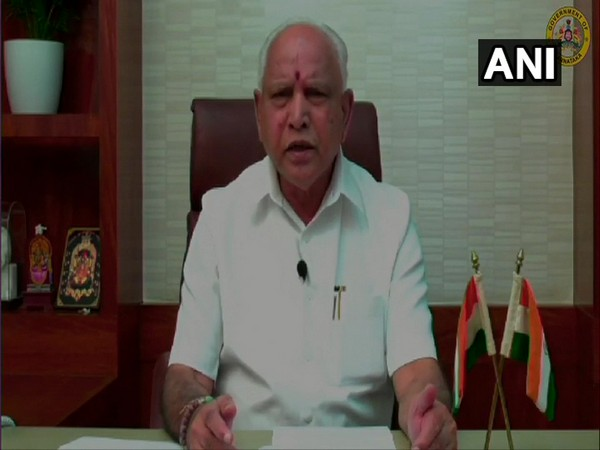 Bengaluru (Karnataka) [India], Aug 9 (ANI): Karnataka Chief Minister BS Yediyurappa has expressed condolences over the death of nodal officer who died while being on COVID-19 duty and announced an ex-gratia of Rs 25 lakhs to the family of the deceased.
The deceased has been identified as H Gangadharaiah. As per reports, he died due to a heart attack while on COVID-19 duty.
A government job and Rs 25 lakhs will be provided to the officer’s family, according to Karnataka Chief Minister’s Office (CMO).
“Chief Minister BS Yediyurappa expressed his heartfelt condolences over the death of H Gangadharaiah, KAS, who was on COVID-19 duty as nodal officer at the Bangalore International Exhibition Centre (BIEC),” Karnataka CMO tweeted.
“CM announced Rs 25 lakhs ex-gratia from Chief Minister’s Relief Fund, a government job for a family member and instructed the last rites of Gangadharaiah to be performed with full state honours,” the CMO added.
In the last 24 hours, 7,178 new COVID-19 cases (including 2665 in Bengaluru Urban), 93 deaths and 5,006 discharged cases were reported in Karnataka.
The total number of cases rises to 1,72,102 in the state, including 79,765 active cases, 89,238 discharges and 3,091 deaths, as per the State’s Health Department. (ANI)

Vikram Vedha Trailer Not Releasing With Aamir Khan’s Laal Singh Chaddha Has More Than One Reason! Makers Want To Unveil…

Asaram Bapu’s son arrested, to be produced in Rohini…