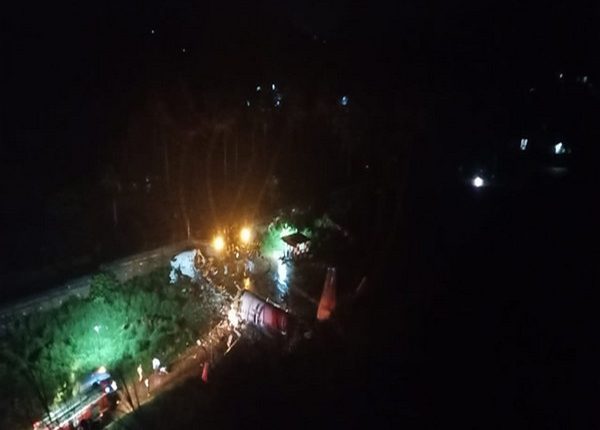 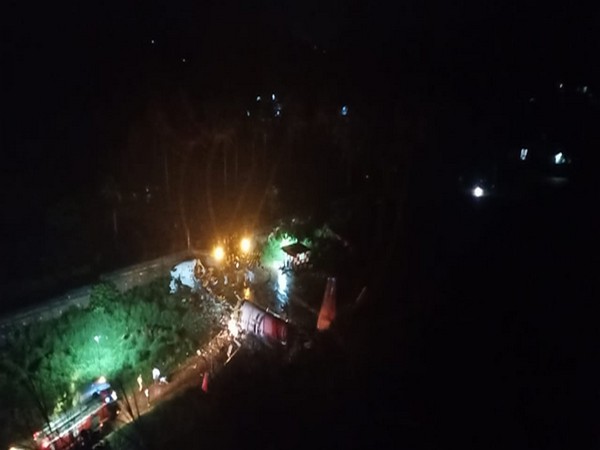 By Ashoke Raj
New Delhi [India], Aug 7 (ANI): Air India Express Dubai-Kozhikode IX-1344 flight, carrying 191 people on board from Dubai under the Vande Bharat Mission skidded off the runway at Karipur Airport in Kerala on Friday evening.
The incident took place at 7:41 pm during the landing.
“174 passengers, 10 infants, and two pilot and five crew members were on board, aircraft was overshot during landing at Kozhikode airport, there was no fire reported.” Air India Express spokesperson told ANI.
“The visibility was 2,000 metre due to heavy rain, after landing Runway 10, continue running to the end of the runway and fall down in the valley and aircraft broke down in two pieces,” Directorate General of Civil Aviation (DGCA) officials said.
India’s aviation watchdog ordered the details investigation into the incident.
Ministry of Civil Aviation (MoCA) said that no fire reported at the time of landing.
“There are 174 passengers, 10 infants, two pilots, and five-cabin crew onboard the aircraft. As per initial reports, rescue operations are on & passengers are being taken to hospital,” MoCA said.
Taking to Twitter, Union Home Minister Amit Shah informed that he has instructed the National Disaster Response Force (NDRF) to reach the site at the earliest and assist with the rescue operations.
“Distressed to learn about the tragic accident of Air India Express aircraft in Kozhikode, Kerala. I have instructed NDRF to reach the site at the earliest and assist with the rescue operations,” Shah tweeted.
NDRF teams are being rushed to Karipur Airport where the Dubai-Kozhikode flight skidded off the runway, for search and rescue, said NDRF Director General SN Pradhan.
Consulate General of India in Dubai has announced helpline numbers 056 546 3903, 0543090572, 0543090572, and 0543090575.
“Air India Express Flight No IX 1344 from Dubai to Calicut skidded off the runway. We will keep you updated as and when we receive further updates. Our helplines – 056 546 3903, 0543090572, 0543090572, 0543090575,” Indian Consulate in Dubai tweeted from its official Twitter account. (ANI)

Dmitry Trenin: Putin has proclaimed a new national idea for Russia as it abandons the dream of a Greater Europe

Ajinkya Rahane to lead India in first Test against New…

IPL 13 schedule will be released on Sunday: Brijesh Patel

Ravindra Jadeja in the same bracket as Ben Stokes: Dasgupta

Manoj Bajpayee’s ‘Aligarh’ to premiere at…