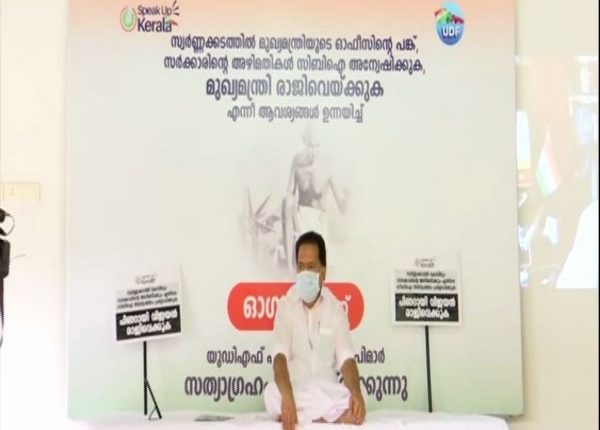 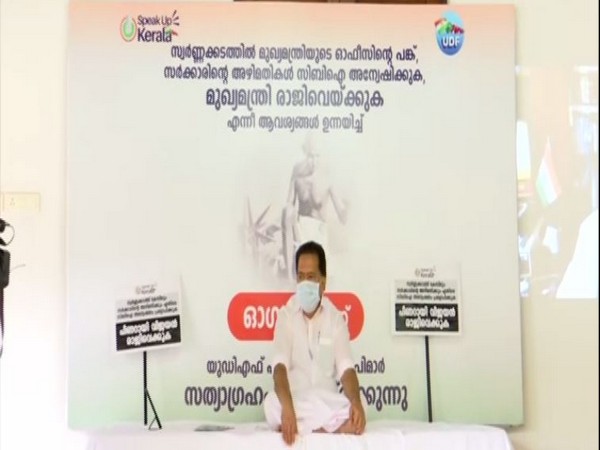 Thiruvananthapuram (Kerala) [India], Aug 3 (ANI): Intensifying the protest against the ruling CPI(M) government in Kerala, several leaders of the Congress-led United Democratic Front (UDF) are observing a one-day ‘Satyagraha’ over the gold smuggling case on Monday.
Leader of Opposition Ramesh Chennithala started the ‘Satyagraha’ at his official residence, while Kerala Pradesh Congress Committee (KPCC) chief, along with other office bearers, is observing it at the KPCC office.
“We are holding the agitation “Speak Up Kerala” in which various UDF leaders including, MLAs and MPs are holding Satyagraha (protest) in their homes or offices in full compliance with the COVID-19 protocol. We are demanding the resignation of Chief Minister Pinarayi Vijayan and initiating a CBI probe into various illegal appointments and contracts awarded by the state government,” the leader said.
He further said, “Gold smuggling case has become a serious issue for the people of the state and country, in which, the Chief Minister’s Office is under the cloud.”
“There is no moral authority for Pinarayi Vijayan to continue as the Chief Minister of the state,” he added.
According to Chennithala, protest is a grand success.
Several senior UDF leaders including former chief minister Oommen Chandy, IUML leader P K Kunhalikutty, deputy opposition leader M K Muneer, RSP leader N K Premachandran are holding the Satyagraha in their respective constituencies demanding that the Chief Minister should step down from his post and a CBI inquiry must be conducted.
The state-level inauguration of Satyagraha was done by AICC general secretary in-charge of Kerala, Mukul Wasnik via a video call and the closing function will be addressed by AICC General Secretary K C Venugopal.
On Saturday, BJP had launched an 18-day long ‘satyagraha’ demanding the resignation of the Chief Minister.
The matter had come to light after 30 kg gold worth Rs 14.82 crores, smuggled in a consignment camouflaged as diplomatic baggage, was busted by customs in Thiruvananthapuram. The case is being probed by the NIA. (ANI)

Mumbai Police capable of conducting probe on its own: Sanjay Raut on Sushant Singh Rajput case

Court to consider charges against Delhi ex-minister on Oct…