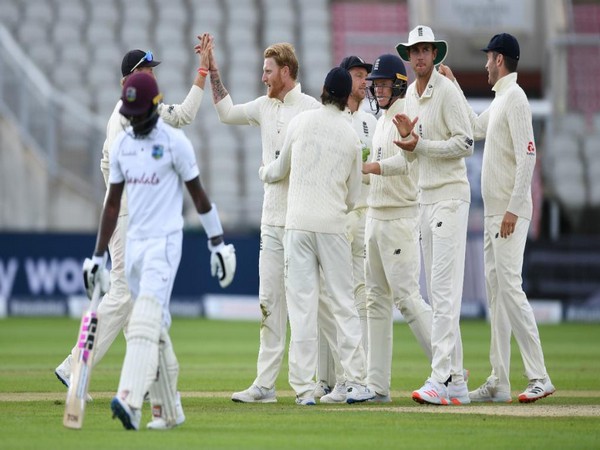 Manchester [UK], July 20 (ANI): England secured a massive 113-run win over West Indies on day five of the second Test to level the three-match series here on Monday.
Resuming the day from 37/2, England witnessed a brilliant start as Ben Stokes and Joe Root smashed 14 runs off the first over of the day. Stokes continued his fast-paced innings and completed his half-century off just 36 balls.
However, soon after that, Root was run-out after scoring 22 runs. England losing a wicket did not put any pressure on Stokes, who kept hitting the ball and played a knock of 78 before the hosts’ declared the innings on 129/3, setting a target of 312 for West Indies.
Chasing a huge target, West Indies witnessed a very poor start to their second innings as Stuart Broad dismissed John Campbell (4) in the very first over. Kraigg Brathwaite was then joined by Shai Hope on the field but they could not form a good partnership as the former was given LBW off Chris Woakes delivery.
Broad then bowled Hope, reducing the visitors to 23/3 after the conclusion of nine overs.
Roston Chase and Shamarh Brooks then took the field. Continuing his stunning form, Broad then sent Chase back to the pavilion which brought Jermaine Blackwood.
Both Brooks and Blackwood provided West Indies with a much-needed momentum as they formed a 100-run partnership with both completing their half-centuries.
Stoked then handed England with a breakthrough as he dismissed Blackwood (55). After playing a knock of 62, Brooks was given LBW off Sam Curran’s delivery.
Following the dismissal of Brooks, England completely dominated and did not let West Indies form any partnership as they bundled out the visitors on 198.
England had declared their first innings on 469/9 while West Indies had amassed 287 runs in their first innings.
The third Test between both teams will begin on July 24. (ANI)

Pakistan trail by 267 runs against Australia