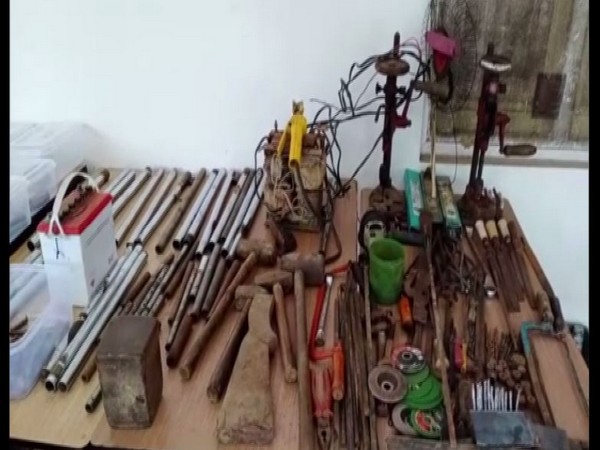 Muzaffarnagar (Uttar Pradesh) [India], July 18 (ANI): The Uttar Pradesh Police busted an inter-state arms racket and arrested nine persons in Muzaffarnagar’s Jaula village on Saturday.
A large quantity of finished and unfinished weapons was recovered from the accused, the police said.
According to the police, 75 finished and 45 unfinished illegal weapons, along with a large number of materials and equipment used in making weapons have been recovered from them.
In an official statement, the police said that 45 country-made pistols, six muskets, one gun, 23 live bombs, 24 unfinished country-made pistols, four cartridges of bombs, and equipment to make weapons such as battery, drill machines, among others were recovered from the accused.
According to the police, the gang members were illegally running a weapon factory in Jaula.
“They used to buy raw materials at cheap rates from Kairana, Meerut, Khatauli, Budhana, and Muzaffarnagar to make the illegal weapons and then sell those on high rates in nearby districts, and in Haryana too,” the police said. (ANI)

Maharashtra govt will take action if Panvel ‘rape’ incident is found to be true: Anil Deshmukh

RBI concerned over impact of cryptocurrency may have on…