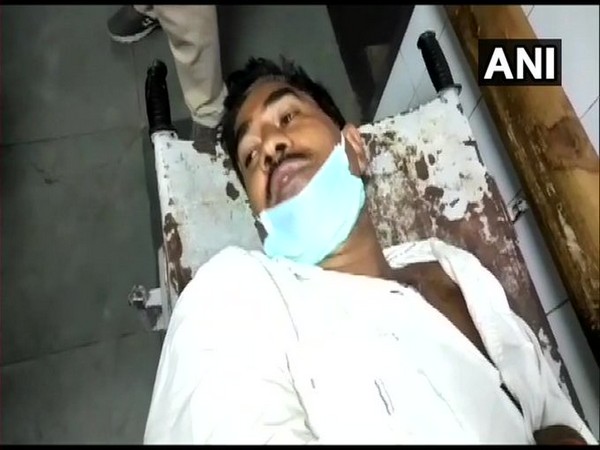 Kanpur (Uttar Pradesh) [India], July 5 (ANI): The main accused in the Kanpur encounter case, Vikas Dubey, had received a phone call from the police station before the police came to arrest him following which he had called other accomplices and fired bullets on the police personnel, claimed Daya Shankar Agnihotri, an accomplice of Dubey.
Earlier today, the police arrested Daya Shankar Agnihotri, an alleged accomplice of history-sheeter Vikas Dubey in Kalyanpur.
“He (Vikas Dubey) received a phone call from the police station before the police came to arrest him. Following this, he called around 25-30 people. He fired bullets on police personnel,” said Agnihotri.
“I was locked inside the house at the time of encounter, therefore, saw nothing,” he added.
Dubey is the main accused in the Kanpur encounter case, in which a group of assailants allegedly opened fire on a police team that was trying to arrest a criminal in the city late on Thursday night. Eight policemen were killed in the incident.
In another development, a photo of Vikas Dubey has been put up at check-post near the India-Nepal border in Rupaidiha, Bahraich district.
According to sources, Dubey’s last location was traced in Auraiya and it is suspected that he might have gone to Madhya Pradesh or Rajasthan, crossing the Uttar Pradesh border.
The Uttar Pradesh Police has contacted the police of both the states. Even after 55 hours, UP Police and ATS have not yet discovered anything in this regard, sources informed.
Review of all the old cases of Dubey has been commenced, the Director-General of Police (DGP) has asked for the current status of these reports while it is being monitored by the Police Headquarters, sources added.
In March, the STF had sent a list of 25 felony criminals to the police headquarters, which did not have Dubey’s name. Vikas has run away with CCTV recordings of a dozen cameras installed at his home, said sources.
The sources have also stated that the names of about 20 policemen have come out in Dubey’s call details in which there is evidence of constant contact with two policemen beside one police personnel from Chaubepur Police Station.
According to police sources, Vinay Tiwari, station house officer at Chaubepur Police station tried to save Dubey. Tiwari did not want the backup police party to reach the spot, so he delayed the rest of the team from going to the spot, sources said.
Tiwari was on a constant phone conversation with Dubey, he did not want any action to be taken, sources informed. Under pressure from CO Devendra Mishra, the SHO became a part of this operation.
Vinay Tiwari had already told Dubey about the pressure coming from CO following which CO Devendra was killed ruthlessly, said sources.
Meanwhile, Chhatrapal Singh, Operator, Shivli Power Sub-station, Kanpur said, “On 3rd July, I had received a call from Chaubeypur Power Station to cut power in Bikaru village (site of Kanpur encounter) as a power line was damaged there.”
Following which the power was cut from this sub-station, at present, the Kanpur police is also questioning the operator of this sub-station. (ANI)

Upholding Fair Play: From Hockey India to other sports bodies, Delhi HC lays down the law

SP leads in Azamgarh, trails in Rampur in LS bypolls

How to increase your immunity

3 jumbos to help catch killer leopard in UP