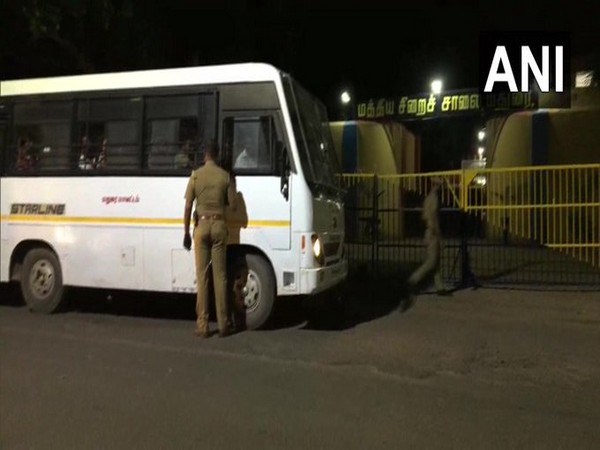 Thoothukudi (Tamil Nadu) [India], July 4 (ANI): Five accused in case of alleged custodial torture leading to deaths of a father-son duo here were transferred from Tuticorin jail to Madurai Central Jail on Saturday.
Earlier today, Crime Branch-Crime Investigation Department (CB-CID) Inspector General Shankar said that after analyzing the evidence in Tuticorin custodial death case we will take all accused in our custody.
“5 arrested so far, after analyzing evidence we will take them in our custody (from judicial custody). We enquired about the approver (Constable Revathi) yesterday,” said the Inspector General.
Earlier this week, the Thoothukudi District court ordered a 15 days remand for three police officials-Inspector Sridhar, Sub-inspector Balakrishnan and Constable Murugan in Perurani Jail in connection with the alleged custodial deaths of a father and son.
Jayaraj (59) and his son J Benicks (31), were arrested on June 19 and lodged in Kovilpatti sub-jail for keeping their mobile phone shop in the Sathankulam main bazaar area open during a curfew imposed during coronavirus lockdown.
The Madurai Bench of the Madras High Court on Friday relieved the Revenue Officers who were deputed to Sattankulam police station by the Thoothukudi Collector, as per the court’s order in connection with the Thoothukudi custody death case.
This comes after the court was informed by the State government that the CB-CID had collected the clue materials from the police station.
“There appears to be force in the submission of Chellapandian, learned Additional Advocate General and we, accordingly, relieve the Revenue Officers deputed by the District Collector, Tuticorin, of the said duty,” the court said in its order.
On the special mention made by Chellapandian, learned additional advocate general, the matter was taken up for hearing on Friday.
The court was hearing a plea filed by lawyer K Chellpandian in connection with the court’s order that the Sathankulam police station shall be brought under the control of the revenue officer to prevent tampering of evidence and documents relating to Thoothukudi custody death case. (ANI)

The Shankar-Ehsaan-Loy interview: ‘We showed that Bollywood…