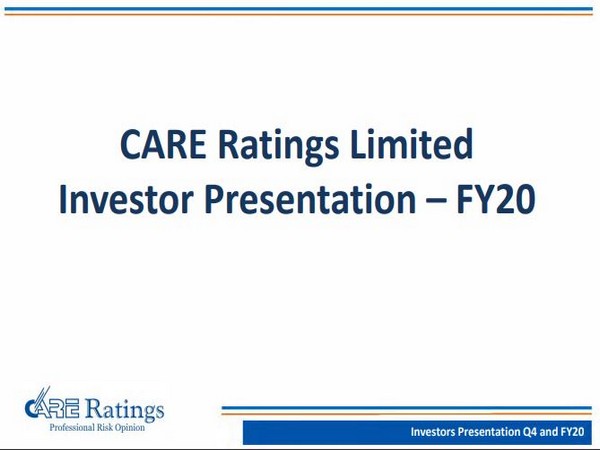 Mumbai (Maharashtra) [India], June 19 (ANI): CARE Ratings standalone income from operations declined from Rs 297 crore in FY19 to Rs 219 crore in FY20 while other income increased from Rs 30 crore to Rs 31 crore.
Total expenditure increased from Rs 129 crore to Rs 150 crore during this period with staff costs going up by Rs 8.7 crore on account of the salary revision undertaken during the year.
Profit after tax declined from Rs 135 crore to Rs 80.5 crore for the year with the margin correspondingly declining to 32 per cent from 41 per cent.
The agency said business during the year was impacted by weak economic fundamentals with GDP growth slowing down to 4.2 per cent during the year. This was also reflected in low growth in bank credit to the manufacturing and services sectors.
A drop in gross fixed capital formation from 29 per cent in 2018-19 to 26.9 per cent in 2019-20 and decline in capacity utilisation in manufacturing as per RBI data from 76.1 per cent in Q4 FY19 to 68.6 per cent in Q3 FY20 affected overall long-term lending.
Also, the demand for institutional credit was low and the discretion shown by banks in lending impacted the flow of funds. This was notwithstanding the lowering of the repo rate by the RBI by 185 bps and infusion of liquidity through various measures.
Hence the overall quantum of debt rated by the company was lower at Rs 12.73 lakh crore as against Rs 19.9 lakh crore in 2018-19.
The shutdown announced in last week of financial year also impacted business plans of several companies which in turn had a bearing on overall fund-raising plans of companies.
For the fourth quarter, total income declined by 29 per cent from Rs 81.5 crore to Rs 57.6 crore while profit after tax came down from Rs 34.6 crore to Rs 13.9 crore.
The board of directors has recommended 25 per cent dividend of Rs 2.50 per share (of Rs 10 face value) which will take the total declared for the year to Rs 19.50 per share. (ANI)

States should use additional funds for infrastructure: PM