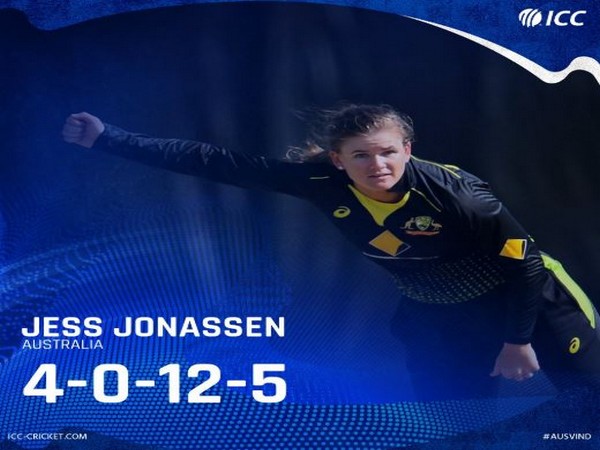 Melbourne [Australia], Feb 12 (ANI): Jess Jonassen registered second-best T20I figures by an Australian woman which powered her side to a win over India here on Wednesday.
Jonassen picked five wickets while conceding just 12 runs off her four overs. Also, she is only the third Australian woman to take a five-wicket haul in women’s T20Is.
With the help of Jonassen’s dominant display, Australia were able to bundle out India on 144 runs to secure an 11-run victory in the final of the Women’s Tri-series.
Jonassen was also named Player of the Match for her brilliant contribution.
Molly Strano has the best T20I figures by an Australian woman. She clinched five wickets and gave away only 10 runs in her four overs against New Zealand in 2017.
In the Tri-Series final, Beth Mooney also played a vital role as she smashed 71 runs off 54 bowls to help her side put up a total of 155 runs. (ANI)

Lakshya’s proposal to train with Victor Axelson in…