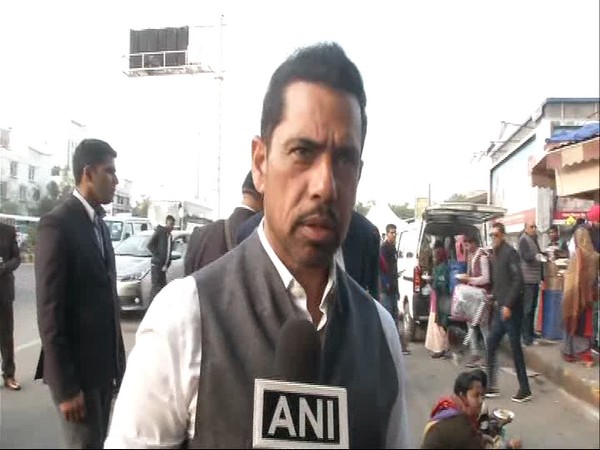 Jodhpur (Rajasthan) [India], Feb 5 (ANI): Rajasthan High Court on Wednesday deferred the hearing in a petition pertaining to the Jodhpur Sky Light Hospitality case, in which businessman Robert Vadra and his mother Maureen Vadra are accused.
Justice Vijay Bishnoi slated the matter for hearing on March 5 after Vadra’s counsel advocate KTS Tulsi did not reach the court.
Additional Solicitor General RD Rastogi, appearing for the Enforcement Directorate (ED), said that they were taking perverse advantage of the interim bail.
Vadra and his mother, along with partners in the Sky Light Hospitality, are accused of laundering money.
The case was registered by the ED in September 2015, claiming that Sky Light Hospitality had acquired land in Kolayat village of Bikaner, which was meant to rehabilitate poor villagers.
It was alleged that Vadra bought 69.55 hectares of land at a cheaper rate and then sold the land to Allegheny Finlease for Rs 5.15 crore through illegal transactions.
In Bikaner land scam fraudsters in collusion with the state government officials got land allotted in the name of fictitious individuals, though the land was actually meant for the people who were displaced due to the creation of the Mahajan Field Firing range.
The fraudsters created forged allotment letters purportedly issued by the Colonisation Department of the state government and 1,422 ‘bighas’ of land was recorded in revenue record in the name of fictitious allottees without due verification of the allotment letters by the concerned department. (ANI)

Pakistan rakes up Kashmir at UN