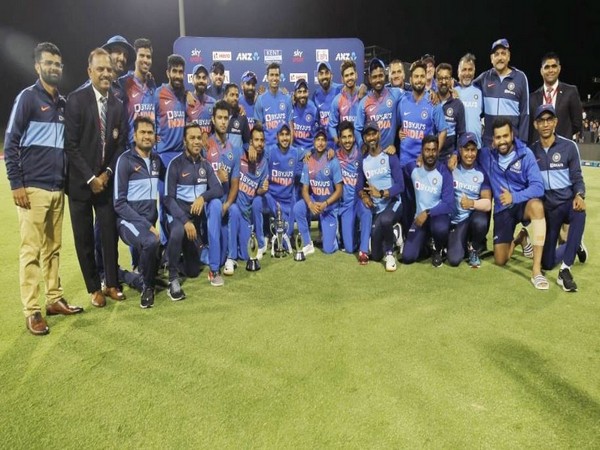 New Delhi [India], Feb 2 (ANI): India skipper Virat Kohli on Sunday expressed elation after the Men in Blue whitewashed New Zealand team in five-match T20I series.
India defeated New Zealand by seven runs in the fifth T20I at the Bay Oval in Tauranga.
After the victory, Kohli took to Twitter to write: “Proud, historic, ecstatic; everything was this moment. #JaiHind.”
Kohli was rested for the fifth T20I and Rohit Sharma led the team in the match.
However, while batting, Sharma was retired hurt after scoring 60 runs and did not come out on the field afterwards. KL Rahul then led the team in the final match of the series.
After opting to bat first, India had managed to score 163 runs in their allotted 20 overs. Later, Indian bowlers bowled brilliantly to hand the visitors a victory. Jasprit Bumrah took three wickets while Navdeep Saini and Shardul Thakur picked two wickets each in the match.
Also, with this clean sweep, India became the first team to win a T20I series by 5-0. Both teams will now compete against each other in a three-match ODI series, starting from February 5. (ANI)

Tri-Series is perfect opportunity to work on things: Perry

I-League: Bengaluru look to get back on winning track

Alonso to retire at season end