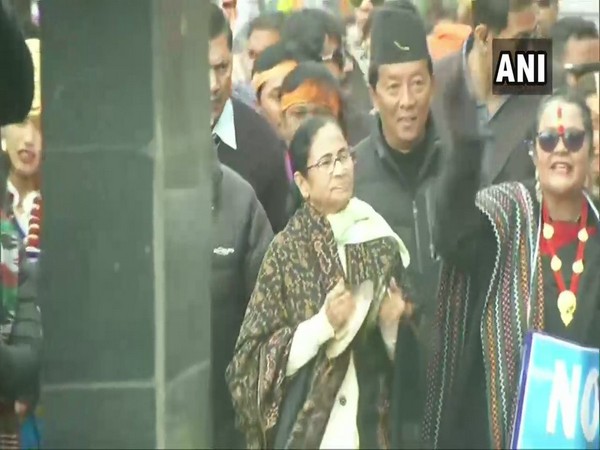 Darjeeling (West Bengal) [India], Jan 22 (ANI): West Bengal Chief Minister Mamata Banerjee on Wednesday sought clarifications from Union Home Minister Amit Shah on the clauses of the Citizenship Amendment Act, asking will a person be declared foreigner and then allowed to apply for Indian citizenship.
After leading a 4-km long protest march against the CAA and National Register of Citizens (NRC), Mamata addressed a rally and said the Centre is trying to push CAA only in non-BJP ruled states.
“The Centre is trying to push CAA only in non-BJP ruled states. I want to Ask Amit Shah will a person be declared foreigner then allowed to apply for citizenship,” she said.
Claiming all states except West Bengal have attended the meeting on the National Population Register (NPR) in the national capital due to fear of BJP-led NDA government, she said: “The CAA, the NPR and the NRC will not be implemented in West Bengal. They have to throw me out first before forcing any citizen out of the state.”
She also assured people of West Bengal not to fear from CAA, NRC and NPR.
“In Assam, the names of one lakh Gorkhas were not included in the list of NRC but you people do not get scared. As long as I am here, I will not allow that to happen in Darjeeling,” she said.
During the protest march here, protesters in the rally were seen holding banners that read “No NRC” while some were carrying the national flag.
The TMC chief has been opposing the new law after it was passed by Parliament in December last year.
Shah on Tuesday had challenged Rahul Gandhi, Banerjee and Akhilesh Yadav for a debate on the CAA.
“I have come to you for a Jan Jagaran Abhiyan in Lucknow. Our government is hardly 8 months old but we are conducting this campaign to dispell the falsities being spread by the opposition against CAA. I challenge Rahul Gandhi, Banerjee and Akhilesh Yadav to engage in a debate on CAA,” Shah had said while addressing a gathering in Lucknow, Uttar Pradesh.
Shah had accused the opposition parties of “misleading” people on the CAA and said that the new law will not be scrapped despite protests over it. (ANI)