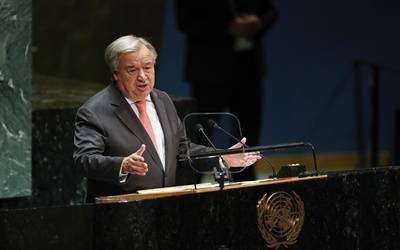 "We enter 2020 with uncertainty and insecurity all around. Persistent inequality and rising hatred. A warring world and a warming planet…" Guterres said on Sunday.

He added that climate change was "not only a long-term problem but a clear and present danger, and we cannot afford to be the generation that fiddled while the planet burned", reports Efe news

But there was also hope, he said.

"This year, my New Year’s message is to the greatest source of that hope: the world’s young people," he added.

The UN chief highlighted the initiatives of the new generations in climate action, gender equality, social justice and human rights, issues in which he said they were "on the frontlines and in the headlines".

"I am inspired by your passion and determination. You are rightly demanding a role in shaping the future," Guterres said in his speech.

"I am with you. The UN stands with you – and belongs to you.

"This year, the world needs young people to keep speaking out. Keep thinking big, keep pushing boundaries, and keep up the pressure," he added.

Guterres also said that 2020 would be the 75th anniversary of the UN and announced the launch of a "decade of action for the Sustainable Development Goals, our blueprint for a fair globilization".

No election unless Palestinians vote in East Jerusalem: Prez