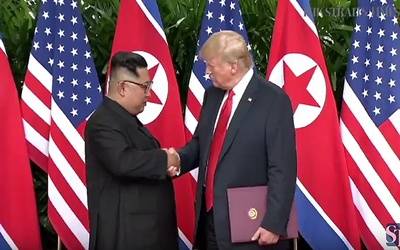 N.Korea, US still seem to have differences: S.Korea Seoul, Dec 6 (IANS) The South Korean Unification Ministry said on Friday that North Korea and the US still seemed to have differences over the denuclearisation of the Korean Peninsula.

Kim Eun-han, a deputy spokesperson of the ministry, told the media here that it seemed that the two nations had differences in positions for denuclearisation negotiations, considering the statements recently announced by North Korea, reports Xinhua news agency.

Kim said South Korea anticipated an advance in the denuclearization talks for the settlement of lasting peace on the Peninsula, noting that the country will make its best diplomatic efforts to achieve it.

The comment came after Choe Son-hui, North Korea’s First Vice Foreign Minister, expressed displeasure on Thursday over US President Donald Trump’s recent remarks on the possible use of force against Pyongyang.

At the NATO summit in London on Tuesday, Trump said that the US has "the most powerful military" and "hopefully, we don’t’ have to use it… If we have to, we’ll do it", in an apparent reference to North Korea.

Choe warned that if such phrases were repeated and they were once again confirmed to be a calculated provocation of Washington against Pyongyang, "we will also start harsh language against the US to counter it".

North Korea and the US held working-level nuclearization negotiation in Stockholm in October, but it ended without progress.

Pyongyang set its deadline for the talks by the end of this year.

Look beyond Dhawan, back KL as T20I opener: Srikkanth