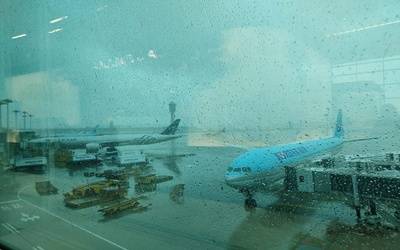 Seoul, Sep 8 (IANS) At least three people were killed due to typhoon Lingling, the 13th storm to hit South Korea this year, which also led to cancellation of hundreds of flights and power outages that affected some 160,000 homes, authorities said on Sunday.

According to the authorities, a woman in her 70s died in the town of Boryeong after being knocked down by winds of more than 140 km per hour, Efe news reported.

In Incheon, west of Seoul, a man died after a wall collapsed on him, and in Paju, north of the capital, another person was killed when he was struck by the panel of a roof that dislodged in the wind.

More than 400 flights were cancelled at various airports in the country due to the the typhoon that made landfall on Saturday, which also left some 160,000 homes in the dark.

South Korean state power company KEPCO reported that 99 per cent of these homes had their power restored by early Sunday.

After passing through North Korea (where the effects are unknown for now), Lingling was at 9 a.m. over the northeastern Chinese province of Heilongjiang, now a tropical storm, according to the Korean Meteorological Administration.

Lingling was the most powerful typhoon to hit the Korean Peninsula since Bolaven, which in 2012 left 15 dead in South Korea and caused damages of more than $500 million.

‘Kung Fu Yoga’ should have a series: Sonu Sood

US judge cancels mask mandate on planes and trains