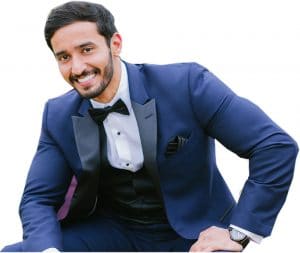 He has that unmistakable Chicago charm around him. He is style savvy, culturally conscious, immensely proud of his roots and most of all — passionate about fitness.

31-year old, Hardik Soni, is one of youngest self-made Indian American entrepreneurs in Chicago. As the founder and president of XDef Fitness and Personal Training, he can be credited to be the first and only from the Gujarati community in Chicago to have ventured into the fitness business. The fact that he has made a success of his venture adds to his resume.

Today Mr Soni, owns two fitness facilities – the XDef Fitness at Mt Prospect and another one at Roselle. He has trained more than 15,000 people in the past eight years and is particularly popular amongst the patrons for his attentive and informed attitude towards his clients.

Both his centers are consistently on top of the review ratings on social media. Last year his Mt Prospect facility also won the award for being the number one fitness and training facility in the city of Mt Prospect.

“Hardik’s contributions to the fitness industry in Chicago were recently recognized on a prestigious platform when earlier this month he was invited as one of the speakers at the TEDx North Park University event.”

Hardik’s contributions to the fitness industry in Chicago were recently recognized on a prestigious platform when earlier this month he was invited as one of the speakers at the TEDx North Park University event. He was placed in the impressive panel where achievers from all walks of life shared their vision. Mr Soni, despite his achievements holds a down to earth attitude. On being chosen to share his health philosophy, he says, “I feel honored if people are inspired by my experiences. If they are able to create a healthy and nurturing lifestyle for themselves, I get my due.”

He also feels indebted to Dr Christopher Hubbard, director of TEDx, North Park University and to Ms Ami Thakkar, director of student leadership who invited him to the platform.

Mr Soni describes himself as a true blue Chicago boy, who has learnt and practiced his trade in this city brimming with culture and community bonding. He says, “I owe my success to so many people from our community, who came to Chicago before us and were eager to help and support youngsters like me who dreamt of following their passion.”

Talking about his journey from India to Chicago, he says, “I came here back in 2000 as a fourteen year old. We moved to Des Plaines where my parents did everything possible to ensure that my sisters and I have a smooth childhood.”

Busting the myth that most young business owners are born with a silver spoon in their mouth Mr Soni’s success story is remarkable. He informs, “We were comfortable in India but when you relocate to a new continent things changed. My dad worked at a gas station and my mom worked in a nursing home. Growing up we were not so well-to-do but despite this my parents believed in me and let me follow a path not conventionally chosen by many Indians.”

THE SOUTH ASIAN SUPPORT IN CHICAGO

Mr Soni believes that one of the most wonderful things about being an Indian in Chicago is the immense support that you get from people in your community. He says, “Early on in my career I felt that people from my father’s generation who had come here much before us understood the real struggle of creating a space for themselves in a new land.” He adds, “Today in Chicago there are so many successful entrepreneurs, business owners, people in creative trade, not just from Gujarati or Indian backgrounds but from South Asian community who came here decades ago and made a mark. Many of them go out of their way to encourage the younger generation.” He gives an example: “When I started my first facility in Mt Prospect, most of my clients came through word of mouth publicity. Since I ensured that immigrants like me get a homely vibe in my fitness centers we were able to create a dedicated community without aggressive marketing.”

He also is extremely appreciative of many acts of kindness by Indians in Chicago. He credits Indian business owners such as Dithu Bhagwagar, who owns the facilities Mr Soni runs because they always encouraged him to meet his goals. The young fitness freak says, “If first generation immigrants like me who didn’t even come from a financially rich background can find a space for themselves and can grow here then the city definitely is welcoming for people across cultures, backgrounds and communities.”

Along the way, Mr Soni also met some very kindhearted Americans who were very helpful as well. He recalls, after I studied physical therapy I always wanted to do something in fitness industry. I worked at a small fitness set up initially where the approach to clients was very commercial. Everything was business centric – the number of clients, the number of products sold etc. I soon realized that my philosophy did not match and I moved out. An American lady who worked with me in the gym let out her space at a very reasonable cost to me. I worked night and day to be able to support my venture. When I could collect the capital, I opened the center in Mt Prospect. My parents were always there to back me when I worked extra long hours. Since I did not have a business to build upon I knew to start from the scratch will take more sweat and tears.” He adds, “So when I was 19 unlike my peers who were partying and clubbing I was religiously gymming, learning and imparting my knowledge to work towards a greater goal.” On an emotional note, he adds, “my dad passed away four years ago and could not see my second facility but today it’s my mom who continues to inspire me everyday and makes me feel that my hard work has been worth it.”

NEED OF THE COMMUNITY

Mr Soni wants to do as much as he can to give back to his community. One of the reasons that prompted him to venture into fitness industry was also because he wanted to create a comfortable space for elderly people from the community to exercise.

He explains, “For the young Indians, fitness forms an important part but for people from my parents generation, traditionally fitness was never given a priority. Culturally it was not common for the elderly Indians to go to a gym and least of all hire a personal trainer. However I realized that this neglect towards their health reflects in the old age. Especially for Indian women, who are so busy nurturing their families and kids that they forget about their own needs. The elders have all sorts of problems from back pain, knee pain, high blood pressure, diabetes, low endurance levels and they have no one to guide them.” 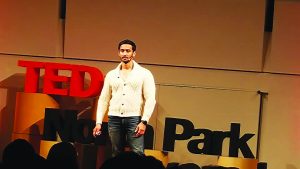 He says, “I observed that even if some of them took gym memberships, they did not routinely use it. The machines and the equipment were often intimidating and there was no personal advisory for their needs or their dietary habits. I wanted to fill this gap. So I began by creating a very personalized experience for my clients and especially the elderly.” The young fitness expert feels proud that today a big part of his clientele comprises of older men and women too. He says, “We give them personal attention, understand their lifestyles and food practices. We also play Hindi and Punjabi music often so that they feel at home.”

While he gets a consistent patronage from his community, Mr Soni’s American and other immigrant community clientele is also as loyal. He says, “I have been able to help so many people struggling with body image issues, people who were depressed and even some who had developed suicidal feelings because of their weight. I feel fortunate that I was able to convince and show so many people that not only is it possible to get results it is also totally possible to retain it. The perks of being in a fitness trade, he says is that he is able to bring a positive change in people’s lives.

Today the young, dapper bachelor can easily be called one of the most eligible men from the Gujarati community in Chicago. He pursues other interests too and loves to travel and dance. His dancing has won him awards too. He won the first place in Boogie Woogie dance has presented his dancing skills in Chicago and has won at state levels too. He also got selected from Chicago to participate in a reality show in India. Back in 2006, Mr Soni was part of reality show Zee Cine Stars ki Khoj. Talking about his brush with Bollywood, he says, “I was in Mumbai for six months during the show and got through many rounds. It was both exhilarating and entertaining. During the stint I met so many stars such as Pooja Bhatt, Madhur Bhandarkar, Anupam Kher and many others. Many top Bollywood stars also often made appearances on the show and I had a god time with people like Anil Kapoor and Juhi Chawla.

Today, the Hoffman Estates resident, is happy advocating healthy living to people in Chicago, who have been the strongest supporting force in his life.

Autonomous drones may have ‘hunted down’ and attacked troops…