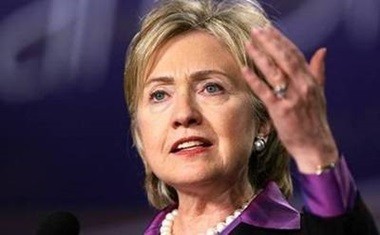 Washington, July 25 (IANS/EFE) Hillary Clinton said that she will answer lawmakers’ questions about her use of a private e-mail account for official business during her time as secretary of state when she testifies in Congress.

The front-runner in the race for the 2016 Democratic presidential nomination addressed the controversy on Friday, hours after The New York Times reported that two government inspectors general referred the matter to the department of justice for a potential criminal investigation.

But before Clinton addressed the issue during a speech on economic policy at New York University, the justice department said in a statement that the request for a probe was "not a criminal referral".

"We all have a responsibility to get this right," Clinton told her audience at NYU.

"I have released 55,000 pages of e-mails; I have said repeatedly that I will answer questions."

Clinton became embroiled in controversy this year while preparing to announce her candidacy in the Democratic primaries by revealing that she had used her private e-mail account for matters of official government business.

Republicans demanded that all messages be made public that Clinton sent from her private account that could compromise national security.

The Republican Party demanded on Friday that the justice department open an exhaustive investigation of the Clinton e-mails.

"Hillary Clinton’s desire to play by her own rules may have further exposed classified information," Republican National Committee Chairman Reince Priebus said in a statement.

"A full investigation by the justice department is not just needed, but required," he said, calling for an independent third party to review the Clinton correspondence.

On June 30, the state department published a new pack of Clinton e-mails from her first months in office as secretary of state, between March and December 2009.

The e-mails handed over in June constituted the second batch of Clinton correspondence from her private account that dealt with matters of national concern, after some 300 e-mails were de-classified in May, most of them regarding the deadly attack on the US Consulate in Benghazi, Libya.

Though Clinton herself insisted that all messages on her personal account were not classified, the state department, which examined the e-mails before publishing them, found that the contents of 25 in the new batch contained sensitive information and could not be divulged.

Usain Bolt bounces back with 100 metre win in London

World could lose $4 tn in economic output between now and 2026: IMF

India invited to Afghanistan meet in Doha this week

Artistes from various shows on Colors come together to wish…