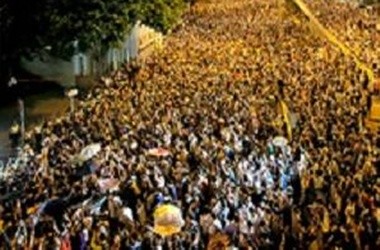 Beijing, Feb 2 (IANS/EFE) Pro-democracy demonstrators in Hong Kong took to the streets again Sunday to demand "real democracy" in their first big march after the "Umbrella Movement" folded up in December, last year.

Local media reported that tens of thousands of people participated in the protest, demanding rights to elect their local head of government in 2017, when the enclave’s citizens will be able to vote, although only for candidates previously selected by China.

"We don’t want fake democracy" was one of the slogans being used by the demonstrators Sunday, when people flooded into the streets carrying umbrellas — the object that became the symbol of the movement last year when protesters used them to protect themselves from tear gas fired by the police.

The demonstration comes almost two months after the big pro-democracy protests against Chinese intervention in Hong Kong’s political future, when hundreds of thousands of local citizens occupied different parts of the city, blocking traffic on main streets and taking over strategic sites. They had ended their protests, but not their calls for democracy.

A large police contingent, which included 2,000 officers, was deployed Sunday in key parts of the city to prevent demonstrators from once again blocking the streets indefinitely, although protesters denied that was their aim.

The march began shortly after 2 p.m. and made its way through the island’s modern shopping district and the financial centre.

US blizzard to affect 65 mn across 18 states