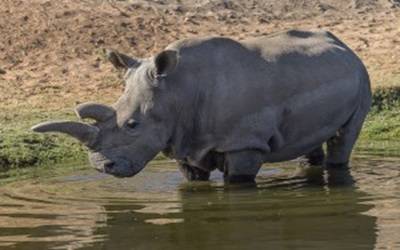 The conservancy’s CEO Richard Vigne said the techniques could provide the last chance of survival for the endangered mammal.

"Artificial techniques of reproduction do not come without risks, but experts believe that all other options have now been exhausted, and time is running out," Xinhua quoted Vigne as saying in a statement.

Vigne said the use of artificial reproduction techniques, concluded from veterinary experts, comes as a much-needed ray of hope to those involved in the conservation of the animals, both in Europe, the US, and in Kenya — where three of the world’s last remaining six northern white rhinos now live.

Following the death of the last fertile northern white male in the conservancy earlier this year, experts from the Dvur Kralove Zoo in the Czech Republic, the Leibniz Institute for Zoo and Wildlife Research in Germany and the Kenya Wildlife Service gathered in Laikipia, Kenya, to carry out health checks on the remaining three rhinos.

According to Ol Pejeta, various copulations between the white rhinos have been witnessed by their keepers, and even a mating between a southern white male and one of the northern white females, but nothing has come to fruition.

Vigne said the conservancy has provided the northern white rhinos with the best possible conditions for natural mating.

"However, recent death of the last male that was capable of reproduction and current health state of the remaining three individuals lead to a situation in which the committee of experts in charge of this programme will now need to explore suitable options of artificial reproduction," Vigne said.

Vigne said despite concerns over age and physical condition, the remaining three rhinos were successfully anesthetised. He said the committee overseeing the project will now discuss the findings from the vet tests and agree on the best way forward.

"We must bear in mind that these rhinos are last of their kind, and we cannot just give up and let them go extinct," said Premysl Rabas, director of the Dvur Kralove Zoo.

Nearly 4% of GDP is lost due to malnutrition: Report