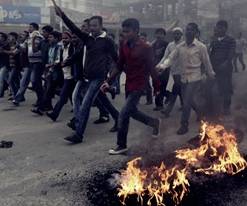 Dhaka, Jan 4: An activist of the opposition Bangladesh Nationalist Party (BNP) was killed on Saturday in a clash between the ruling Awami League and the BNP supporters.

According to police, Mobarak Hossain, 35, was killed in a clash at Patgram upazila’s Baura area, The Daily Star reported.

Hossain was the president of the Baura union unit of Swechhashebok Dal, the volunteers’ wing of the BNP.

Voting for the 10th parliamentary poll is scheduled to be held Sunday amid a 48-hour opposition strike called to thwart the polls.

People said the clash broke out when the BNP activists tried to close down shops in a market after the strike started.

Police added that Hossain died on the spot while five others were injured during the clash.

Additional police force have been deployed in the area following the clash, added the police.

The BNP has announced Friday another shutdown for 48 hours starting from Saturday. The shutdown will end at 6 a.m. Monday and was aimed at protesting the confinement of party chief Khaleda Zia and to seek cancellation of the polls.

Since Nov 26, the BNP-led 18-party opposition alliance has enforced a nationwide strike for 22 days in phases, demanding the cancellation of the elections. It wanted the polls to be held under an independent caretaker government, a demand the Awami League has declined.