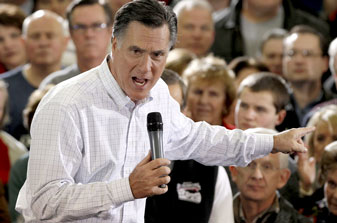 Tampa : Mitt Romney beat his closest rival Newt Gingrich by a sizable margin in the Florida Republican primary on Tuesday, taking a big step toward his goal of winning the party’s nomination to challenge President Barack Obama in the November 6 election.

US television networks projected Romney as the winner just as the last polls closed in Florida. With 61% of the vote counted, Romney had 47% of the vote to Gingrich’s 31% in the largest nominating contest so far this year.

The victory in Florida enabled Romney, the wealthy former Massachusetts governor and private equity firm executive, to rebound from his decisive loss to rival Newt Gingrich in the January 21 South Carolina primary.

The well-funded and well-organized Romney surged in opinion polls in Florida after aggressively pressing Gingrich in two debates and pounding him with negative advertising.

The Florida primary was the fourth in the series of state-by-state contests to pick the Republican nominee to face Obama. Romney has triumphed in two of the first four contests, having also won in New Hampshire and coming in second in Iowa and South Carolina. The Florida victory was his biggest yet.

The next contest is the Nevada caucuses on Saturday, followed next Tuesday by caucuses in Colorado and Minnesota and a primary in Missouri.

Analysts said the double digit victory in Florida cements Romney’s status as front-runner in the race.

The win also demonstrated Romney’s ability to compete strongly in a major political battleground state with a broad voter base that includes a diverse electorate including Tea Party conservatives, evangelical Christians and Cuban-Americans.

Romney and spent millions of dollars in Florida with a barrage of negative ads that focused on Gingrich’s ethics violations when he was speaker of the US House of Representatives in the 1990s.

According to exit polls by CBS, 62% of the Republican voters said the economy was the most important issue to them. Romney has campaigned hard saying he is best placed to fix the economy based on his experience as a businessman.

“(Romney’s) a businessman. He knows how to make money. If he makes promises, he’ll keep them,” said Frank Lobue, a retired utility company employee, who voted in St. Petersburg.

Voters also said in exit polls that they very concerned about picking a candidate who could beat Obama.

The campaign now moves on to states that may play to Romney’s strengths, particularly on Feburary 4 in Nevada, which has a large population of people who share Romney’s Mormon faith, and on Feburary 28 in Michigan, where his father was governor.

Shantanu and Nikhil to open for WIFW 2012

Illinois schools can cut social distance from 6 to 3 feet…

Employees seek extension of benefits in case of Air India…