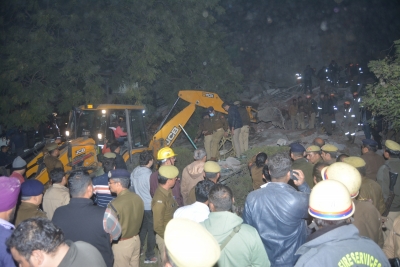 Lucknow, Jan 25 (IANS) At least 12 residents have been rescued and rushed to hospital from a building that collapsed here on Tuesday evening.

SDRF, NDRF and army teams carried out rescue operation till the wee hours of Wednesday, carefully removing the debris and bringing out trapped residents.

Nearby buildings have also developed cracks following the collapse.

The injured were been admitted to various hospitals in Lucknow.

“The rescued persons were given timely medical assistance, and oxygen supply had been ensured to those trapped under the debris,” he said.

Principal Secretary (Home), Sanjay Prasad, who personally supervised rescue operations through the night, said that priority was to ensure the safety of those trapped in.

“The incident took place around 7 p.m. No casualty has been reported,” Prasad said.

While the reason for the collapse of the residential building – Aliyah Apartment – in Hazratganj area could not be ascertained immediately, preliminary reports indicate that construction work was going on in the building’s parking lot. The building had 12 flats and two penthouses on the top floor.

“Probe will be conducted to ascertain the reason for the collapse,” Prasad added.

The Chief Minister has directed officials to ensure that adequate treatment is provided to the injured. He has also issued directions to hospitals to stay alert, a senior official said.

“Eight families were inside when the building collapsed. As per our estimate, 30-35 people should be (trapped),” said Director General of Police D.S. Chauhan.

Army personnel, along with teams of NDRF and SDRF have been deployed for the rescue operation, which continued through the night.

The NDRF, police and fire brigade personnel are present at the spot. A rescue operation is underway.

How Indians Are Coping Up With Job Lay-Offs

Nasser Hussain tips Jemimah to be a future cricket star